search close
See Salon Near You>

WE KNEW WE WANTED TO CHANGE THE INDUSTRY 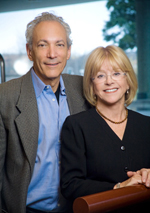 In 1973, newlyweds Dennis and Ann were having dinner at a restaurant when the conversation turned to their jobs. Dennis had been working for his father’s chain of Washington-area beauty parlors, Louis Creative Hairdressers, but he was ready to venture out on his own. Ann was uninspired by the conservative cuts at the downtown Washington beauty salon where she was a Stylist. The couple agreed—it was time to break free.

Together, Dennis and Ann drew up a rough business plan on a napkin detailing a new kind of hair salon where you could walk in without an appointment and get great service for the whole family for a fraction of the cost. Unsure their idea would fly in a generation conditioned to fussy beauty parlors and clubby barber shops, the Ratners opened the first hair Cuttery in Virginia. Before the year was over, they opened two more. “We knew we wanted to change the industry,” Dennis says, “and there was nothing holding us back.”

The first Hair Cuttery was born in West Springfield, VA in 1974. Today, it represents the largest privately-held salon chain in North America. The brainchild of Dennis and Ann Ratner, Hair Cuttery now encompasses approximately 12,000 Associates with 806 Salons in 16 states. The phenomenal growth of the company can be traced back to its original business model which consisted of three concepts—convenience, price and consistency.

HELPING OUR PEOPLE ACHIEVE THEIR DREAMS AND GOALS

In 2016 Phil Horvath was appointed President and COO of Ratner Companies. He brings more than 25 years of beauty and salon industry leadership to his new role. Mr. Horvath draws upon his experience in leading aggressive growth in both the service and retail sides of the hair salon business as he takes the helm at Ratner Companies.

"I believe that we can help others achieve their dreams and goals," Phil says. "Business has to be about purpose and people and then prosperity will follow.”